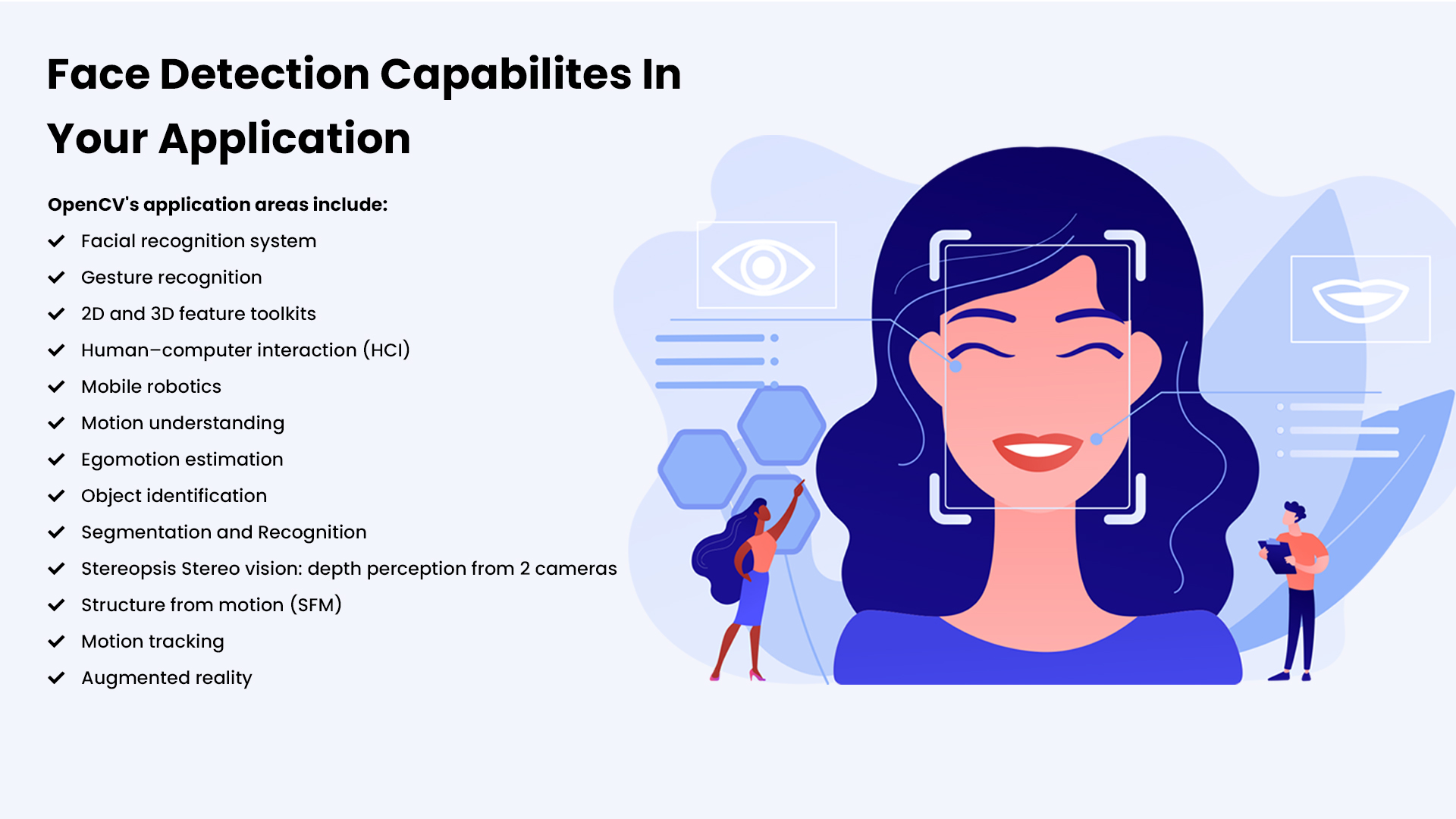 Face detection is a computer technology that determines the locations and sizes of human faces in arbitrary images. It detects facial features and ignores anything else, such as buildings, trees and bodies.

Applications uses modern face-detection algorithms which attempt to solve the more general and difficult problem of multi-view face detection. That is, the detection of faces that are either rotated along the axis from the face to the observer (in-plane rotation), or rotated along the vertical or left-right axis (out-of-plane rotation), or both. The newer algorithms take into account variations in the image or video by factors such as face appearance, lighting, and pose.

OpenCV (Open Source Computer Vision Library) is a library of programming functions mainly aimed at real-time computer vision, developed by Intel, and now supported by Willow Garage and Itseez. It is free for use under the open source BSD license. The library iscross-platform. It focuses mainly on real-time image processing. If the library finds Intel’s Integrated Performance Primitives on the system, it will use these proprietary optimized routines to accelerate itself.

The library has more than 2500 optimized algorithms, which includes a comprehensive set of both classic and state-of-the-art computer vision and machine learning algorithms.

OpenCV is written in C++ and its primary interface is in C++.

OpenCV runs on Windows, Android, Maemo, FreeBSD, OpenBSD, iOS, BlackBerry Linux and OS X. The user can get official releases from SourceForge, or take the current snapshot under SVN from there. OpenCV uses CMake.

Open CV provides FaceRecognizer which provides a unified access to all face recognition algorithms, below are some of the sample usage.

Facebook’s automatic tag suggestion feature, which used face recognition to suggest people you might want to tag in your photos, got people hot under the collar earlier this year. However, whether you find it creepy or cool, face recognition for people tagging certainly saves time. It’s currently available in Apple’s iPhoto, Google’s Picasa and on Facebook.

Face recognition could one day replace password logins on our favourite apps – imagine logging in to Twitter with your face, for example. Just look at this demo we recorded at Manchester University last year, where researchers were working on creating consumer-focused face recognition technology for security applications. It’s not fooled by photographs, either! A number of well-known companies are reportedly interested in integrating the technique into their products.

It is a variety of an already existing captcha which uses graphic images and sounds. However, using a face and/or motion detection technology you are not going to bother users with recognizing bizarre letters and unclear sounds any more. All the user needs is to show his face in motion so that the website owner is sure that he is a human being, not a machine. No more losing partners and visitors, no worry of being spammed by robots.

If you are an owner of a video chat our application should meet some of your needs. All of your customers obviously have a webcam. Unfortunately, there are the people who tend to spoil your reputation making the rest of the users see indecent pictures of a sexual nature. Using the face detection technology you can be sure that all of the visitors of your website behave properly and feel comfortable even if their children use this service. Moreover, it could be a sound idea to use the face detection module to define the status of the visitor. If he is not present in front of the screen he obtains an “Away” status, when he comes back and his face is detected, “Online” status appears and the rest of the users are able to see him again.

If you are interested in tracking the billed hours of your employees this is exactly what you need. No way to cheat you, no more money spent in vain. You will only pay for hours spent by your employee on his working place. In case a web camera no longer detects a face and/or motion in front of it the time tracking is stopped. In the moment a person comes back it starts again. As easy as ABC.

Reach to our expert today and see what this technology can do for your online product and take your business to the next level.