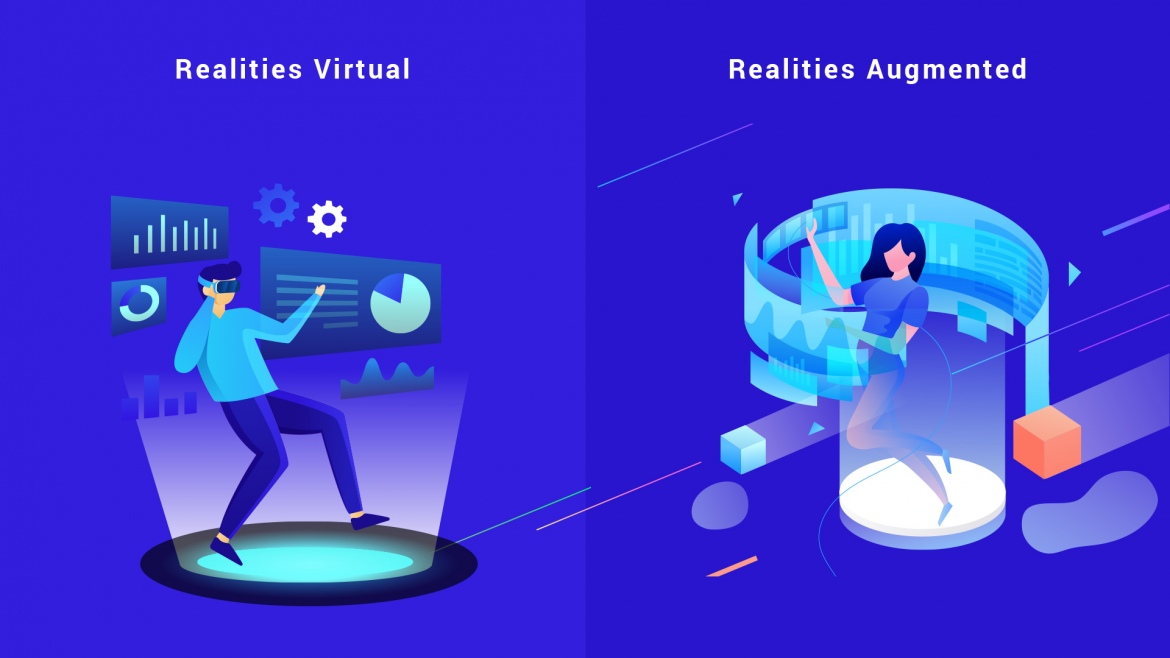 Augmented Reality or AR and Virtual Reality or VR come up as two ends of the same sentence. There can be no conversation where both of them aren’t together discussed.

To all those who are less informed about them and use them alternatively, we must tell you- as related as they are, the difference, however, is enormous and worth explaining.

First up, they both possess the ability to change our perceptions of the world, the knowledge of our presence is what is the main difference between augmented reality and virtual reality.

Virtual reality is what we call 3D or computer generated digital environment wherein one can perceive things and interact with objects realistically. Peripherals like headsets and motion sensors are employed to transmit the appropriate feeling to all the senses.

Augmented Reality like its name suggests, enhances the reality with additional content that is virtual. 2D or 3D digital materials such as sounds, visuals over real physical world objects is what could be called Augmented Reality.

VR creates an imagination to interact with; AR adds to the stimulating content to already existing real world aspects.

-> Famous Examples of VR and AR

Most common examples of VR Technology include

These employ smartphone cameras to place the virtual graphics over the real world view.

-> Devices and Platforms These Technologies Manipulate:

To track Head and Body movements, spatial audio setups, and stereoscopic displays; the VR technology makes use of Gyroscope and Motion Sensors. For VR settings, Wearables and accessories are crucial to being able to interact more realistically.

Using standard hand-operated game controllers, one can easily navigate through virtual environments. To accurately replicate movements, treadmills and similar devices are put to use.

Tools like Oculus Rift, PlayStation, VR and HTC vive could sync to external devices like the consoles and PCs.

To experience physical reciprocation through sensations such as vibrations, Bodysuits and Gloves exist to serve the purpose.

To allow users to perceive digital content and materials, AR employs display systems along with input systems and location tracking sensors. Smartphone models boast availability of most of this hardware.

Accelerometers, Gyroscopes, Optical Sensors, and GPS that comes with built-in specs in standard smartphones, through which the position of the user can be tracked.

-> Applications of VR and AR Technology

VR allows for numerous possibilities when it comes to creating outstanding imageries, precisely the reason why it is more popular than AR in the field of technology. AR is seen as a daily requirement in the processes and enterprise applications.

VR comes of use in the following aspects of our lives.

Be it games, virtual theme parks, and videos, etc., VR is extensively used for such sort of entertainment purposes. However, VR is required for virtual viewing, sporting events and live concerts, and virtual tourism.

To train personnel in the military safely, VR technology is required to create high-intensity situations like emergency and combat scenarios.

For business to coordinate better with global teams, VR technology is used for the purpose of remote conferencing. VR is enables employee training effectively by creating life-like stimulation.

There are two conditions of content creation when it comes to the VR application.

Unreal and unity game development are some popular game engines that the providers generally use for top virtual reality game services. VR applications.

The best augmented reality developers like the Unity Game Development, with an effective knowledge about the AR technology; combine expertise In the development of mobile apps and processing of image. An example would be Vuforia which is an augmented reality app development that support detection of target, virtual buttons, 2D and 3D recognition, etc.

-> Future scope for AR and VR

MR or Mixed Reality combines the aspects of both the augmented and the virtual realities. MR enables users to interact realistically with virtual materials, for example, Holograms, placed perfectly in the real world setup.

However, this technology is in its initial stage; with the development of Microsoft Windows Mixed Reality Headsets, MR is expected to take a leap far ahead in the coming years.

Potenza Global Solutions has over the years, aced in the field of AR and VR technology and aims to provide efficient solutions in the services mentioned above. Being a forerunner among the leading providers of virtual and augmented reality game and app services, it invites those who wish to take a step in the right reality to further explore the galaxy of the AR/VR projects today.