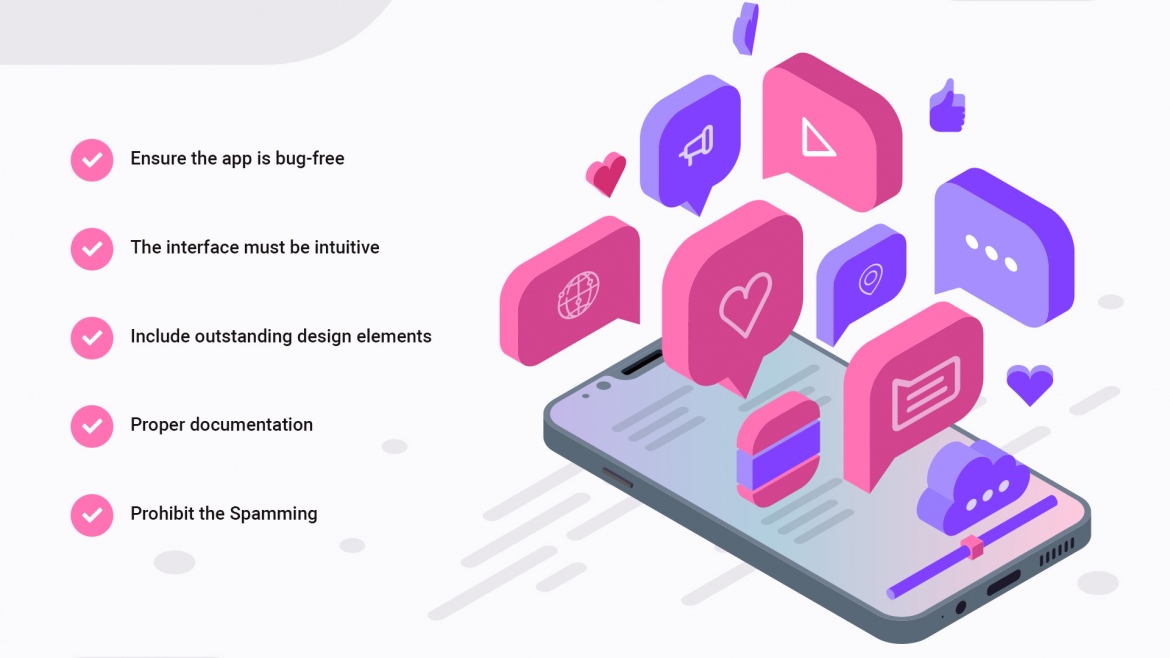 iOS- the one of the leading platforms is profoundly known for having high-quality apps and stringent requirements that must be met to upload the app onto the Apple store.

The innovations are made and adherence to the standard practices is mandated by the Apple store to ensure that the users find the apps usable enough and can use the app with a great convenience.

Although half of the iOS apps submitted on the Apple store faces rejection may be due to the low-quality or they are designed by not paying attention to the guidelines. It indicates there is a dire need of following the certain tips while developing and designing the application by iPhone application development Company.

Take a look at what are the tips that guarantee the submitted app get the clearance of Apple’s review team and score high popularity among users:

In the hush of completing the app before the deadline, the QA and testing team pass the app without testing it rigorously, which in turn leaves some flaws in the application. The bugs don’t let the app to function fine and consequently, the app crashes. Sometimes, the broken links are also left in the application which annoys the users.

This should not happen. The development team makes certain that the app must not get submitted unless it passes all the quality checks and declared flawless by the testing team.

Along with the remarkable image designs, the images included in the app must be of high resolution to offer the consistent experience to the users across all the iOS devices. But, the iPhone app developers need to keep in mind that the simple UI design elements work very differently from the UI design elements with 3D touch, so the images must be crafted accordingly.

Adding the accurate description in a simplified way and best screenshots are must, to let the users better understand the app and its features.

Without documentation, understanding about any application is implausible. The developers should prepare the comprehensive documentation that includes every detail of the app such as the tools used, app’s usability, app’s functionality, contact information and so forth.

The documentation builds the trust in the developers and ensures the review team that app is reliable enough to accept and delivers value to the users. Increase the chances of getting the app uploaded onto the Apple store with good documentation.

It’s a no-brainer to create the clone of the app, submit it to the Apple store and expecting it to get approved as no app store approve such apps. At the Apple store, the spamming is clearly an offense and still if the developers or business make the attempt of creating multiple versions of the same app, then all the time and effort investment goes into the vain.

The reason behind is the Apple store not just reject such applications, while terminating the developers’ account from the iOS Developer Program if they make the endeavor to build and submit the application’s clone.

Well, building an iOS app is not extremely taxing, while there are just a few things that developers need to carefully consider and follow to engineer the iOS app that creates a major breakthrough. Tap into the lucrative iOS app market with best-in-class iOS application and enjoy the advantages in abundance. 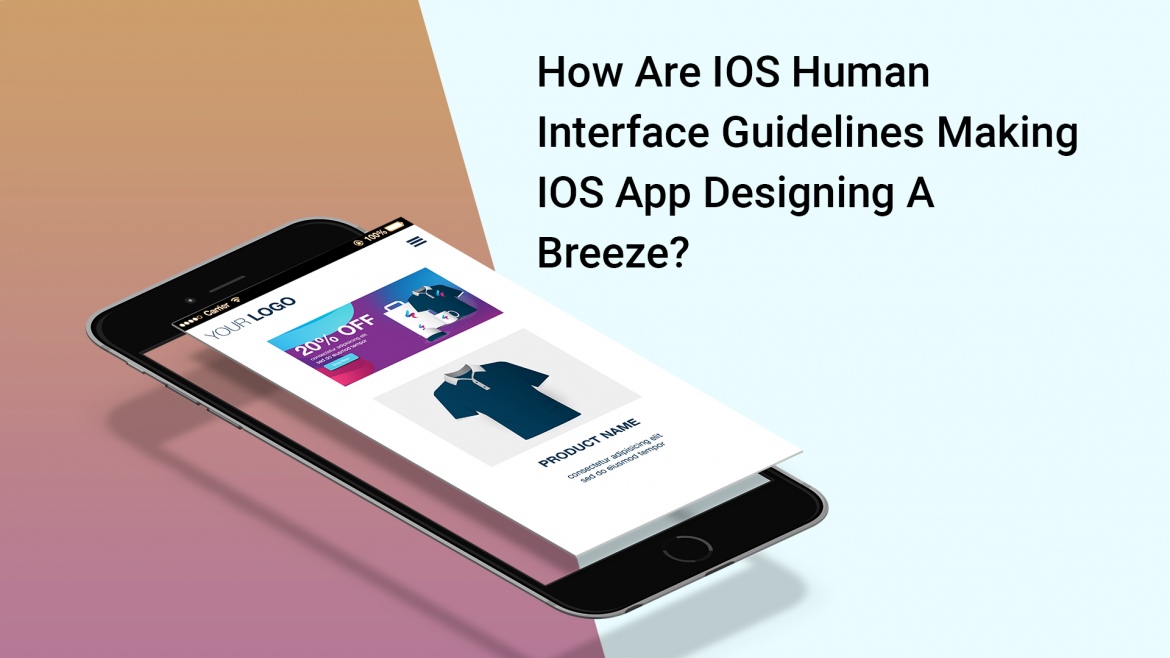 70% of the users decide in 30 seconds that they will use the app in future or not when they first browse the app.

The factor that plays an important role in making the decision is app design and layout. That’s the reason, a decent time is given and best designers are hired for the iOS app development to build the app that intrigues the users and craft immersive experiences with intuitive design, fantastic layout, and user-friendly navigation.

Among all the app stores, the great designs stay at the core of iOS app store and after a great research, the human interface guidelines (HIG) are prepared which iOS app designers have to follow to make their app uploaded onto the app store. Also, it aids in designing the app that users like.

If you have board onto iOS app development journey, make certain to follow the iOS HIG guidelines, otherwise, your app may face rejection from the app store. Although it’s not mandated to follow the rules step-by-step, while they are just to guide you, so you own the rights to break the rules when you wanted to do experiments with the design.

iOS human interface guidelines- take a sneak peek at it!

The iOS have launched the myriad of the devices of different screen sizes that have distinct resolution and number pixels per inch (PPI) as well. So, the higher is the pixel per inch, the clearer content will be displayed without any distortion.

Designs are created in points where each point can accommodate as many pixels. Ideally, one point contains 2*2 pixels on a retina display. But, iPhone 6 and 7 plus have retina HD screens that have a lower pixel resolution, so content gets automatically re-sized to 87% of the original resolution. The iPhone App Developers must be aware of all such things.

The icons added to the app are available as squared PNG files in a range of dimensions with rounded corners. The designers are given the liberty to add a stroke, gloss effect, or shadow effect to the icons at the corners. Besides, the golden ratio system is provided to align the elements on the icon precisely. This is not a thumb rule to follow, while it can be broken if element alignment is not needed.

The font that’s available on the range of iOS devices is San Francisco that comes in two distinct shapes. One for the UI components and other is used for letter spacing. There exists a rich collection of custom fonts that can be used for commercial use, but without a license- don’t use them, else they may prove to be expensive.

The vibrant color palette provided by the iOS is outstanding that designers could leverage while adding color to the layout. Adhering to the standard color palette is not essential, instead, new colors can be used to create the best contrast in the designs.

Presently, in place of adding text labels, the designers prefer to add visual icons such as bar button icons, activity view icons, tab bar and so on. Adding additional effect to the icons is prohibited in the iOS design principles.

The design elements are readily available views and controls which enable the designers to design the interface in a real quick. The design elements like- status bar, navigation bar, search bar, toolbar and tab bar can be customized to a certain level, but not much. Otherwise, they bring the design into the danger zone where the users get confused, so don’t customize the look unless you are 100% sure.

The controls are included to hint the users to take the specified action with a simple touch. The controls can be buttons, pickers, sliders, steppers, switch and keyboard. It works perfectly with various features like- pickers for date picking, slider for selecting from the range of values, switch to toggle between two states, and pretty more.

The human interface guidelines lay the foundation on how the designer can get started with iOS app designing. It provides the necessary information about what iOS provides and how the designer can innovate while adhering to the iOS design principles. It really helps a ton. About to start a new iOS project? Craft the new iPhone application by partnering with the best iPhone app development company that designs that perfectly sync with user design needs.

When it comes to app development, the two budding names pop up in every one mind that are- Android and iOS.

What the epic battle of these two will bring for the future generations is unknown? Also, here we are not going to stuck into this. Yes, but one thing is widely known that most businesses choose an Android platform for the app development. The stats in 2016 from Statista are also illustrating the same thing.

But, in 2017, it is anticipated that scenario will be completely changed. The iOS app development takes the lead in the market with increasing sales of Apple devices. In this brutal war, watching iOS market trends and high demand for the iOS devices, businesses are now jumping onto iPhone Application Development to rise above the horizon.

To achieve the goals and create a lot of buzz in the market with iOS app, the businesses need the help of the best developers to carry out impeccable iPhone application development.

In a nutshell, let’s discuss why you need to hire the professional iOS app developers:

When you outsource the project, the wireframes and prototype the team builds initially gives you a basic understanding that the team has rightly understood the requirements or not.

Post wireframe delivery, ensure that team divide the app development into sprints and deliver the sprints after regular intervals so that you will not get any surprise at the end. When the small milestones are completed on time, then the app will definitely be developed before the deadline.

High-end security stays at the top of the app development that only professional iOS experts can better comprehend and take care of. When malware is able to put a security hole in the app, all the investment will be a total waste and simultaneously hurts the brand image as well. Recruit the team that builds the apps leaving no loose end for malicious software to get inside the app data.

Launching the app into Apple store is not plain-sailing. Instead, the iPhone app developers have to follow all the guidelines like UI design, UX, features and app content related rules during app development to make the app get submitted onto Apple play store without any fail.

Pretty much done! What’s next?

Making the iOS app get featured on Apple store and gaining the iOS fans traction is a hard nut to crack. That’s where a proficient iOS app development company can help you which offers the myriad of digital services from app development to the digital marketing to enable the businesses to create a major breakthrough.

Wanted to leverage the rich expertise and experience of the pool of resources for your custom app development? If so, don’t hesitate to get in touch with us today.